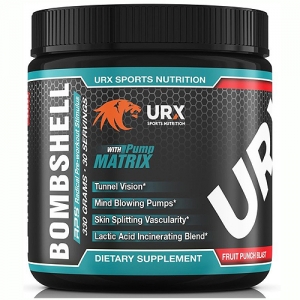 URX Bombshell is a new version of a well-known pre-workout consisting of DMHA. The preparation increases the endurance and efficiency of the body, increases motivation for training, accelerates fat burning and, above all, affects the achievement of a powerful muscle pump. The specific formula allows you to achieve the best visual effects satisfying even the most demanding users.

Bombshell is a product that will ensure you overcome your own barriers putting you in a master position. The multidirectional action makes it a very attractive and distinctive product against the background of competitive pre-workout stacks.

Beta Alanine - is necessary for the production of carnosine and building blocks that help to prevent the aging of the body. The compound supports the proper functioning and development of muscles. Amino acid is known for reducing muscle fatigue, which can help your muscles work better during training. This in turn promotes muscle growth. Beta-Alanine is particularly helpful in intensive short-term training such as weight lifting. Some people taking beta-alanine may notice a slight tingling sensation known as paraesthesia. The tingling arises because beta-alanine dilates the blood vessels, allowing more oxygen and blood to be delivered to the muscles.

L-Arginine - the most well-known property of arginine is the synthesis of nitric oxide - a substance that dilates blood vessels. Thus, arginine contributes to a more efficient and faster transport of nutrients and oxygen to working cells, as well as the discharge of toxic metabolic compounds, inhibiting metabolic processes.

Agmatine Sulfate - is one of the newest and most exciting diet supplements with many physiological benefits, including as a pre-workout measure to support overall sports performance. Agmatine sulphate is a biogenic amine and is the highest quality form of agmatine sulfate on the market that has been subjected to HPLC tests to check for purity and potency. Effectively intensifies the secretion of nitric oxide in the human body, which translates into a strong muscle pump feeling during training. Enlargement of blood vessels supports the supply of blood and nutrients to working muscles, which greatly speeds up the process of regeneration and construction of new muscle fibers. In studies using agmatine, it has been shown that its action may support protein synthesis even twice, which in addition to the action of agmatine itself, is also associated with the action increasing the supply of nutrients to muscle tissues.

Caffeine - has a thermogenic effect and suppresses appetite due to the increase in the production of adrenaline and norepinephrine. It has been proven that it causes the formation of such neurotransmitters as dopamine, acetylcholine or even serotonin in the central nervous system, which exerts a stimulating effect and increases cognitive functions. The overall activity of caffeine on the body, allows you to maintain the effectiveness of training and maintain a positive mood, despite the calorie deficit.

2-Amino-6-methylheptane-DMHA-is a stimulant that has other names such as 2-aminoisoheptane or octodrine. DMHA has a relaxant effect on the bronchi, thanks to which our aerobic capacity increases, moreover it has decongestant activity (narrowing blood vessels, causing an increase in the oxygen flow rate), does not cause "stupor" and sharpens the senses that could not always be experienced with dmaa.

L-Theanine - is a non-protein amino acid found naturally in the leaves of green tea - camellia. It has psychoactive properties because it easily overcomes the blood-brain barrier. It stabilizes the mood, calms, relieves symptoms of stress and anxiety. Also used as a nootropic agent - improving cognitive functions, work efficiency and learning effectiveness. Researchers demonstrated theanine efficiency in increasing attention, vigilance and productivity, and the effects are already visible within the first hour after administration. Researchers are of the opinion that the relaxing effect of green tea is due to theanine, which affects the intensity of alpha brain waves probably by affecting the activity of some neurotransmitters, including dopamine and serotonin. It is extraordinary that this amino acid can increase vigilance and clarity of mind, while introducing a state of relaxation and deep relaxation so strongly that it eliminates the stimulating effect of caffeine. Thanks to this, it is applicable to people who react badly to stimulants or who suffer from neurotic-anxiety disorders, and at the same time need to maintain high productivity and alertness of mind.

Theophylline-has a caffeine-like effect, additionally has a positive effect on breathing and improves blood flow. Theophylline, being a phosphodiesterase inhibitor, contributes to the increase of the intracellular concentration of cyclic AMP, thereby enhancing thermogenic and lipolytic processes and increasing the ability to concentrate and reducing fatigue. These properties make theophylline a valuable supplement to the composition of fat-burning supplements and pre-workout preparations.

Isopropylnorsynephrine - a stimulant substance. It is the perfect complement to caffeine, dmha and synephrine. It has specific properties to prolong the lifespan of adrenaline and norepinephrine released previously due to the rest of the substances contained in Bombshell.

Alpha Yohimbe - shows antioxidant, anti-inflammatory, analgesic properties, supporting carbohydrate-insulin metabolism, counteracting cancer and improving mental condition. Inhibiting the work of the cholinergic system, it increases the concentration of adrenaline, stimulating the body to function and intensifying the lipolysis process. Strengthening the oxidation of fatty acids in the mitochondria. It promotes the burning of previously stored adipose tissue in areas of the body rich in α2-adrenergic receptors, mainly the lower abdomen and on the hips.