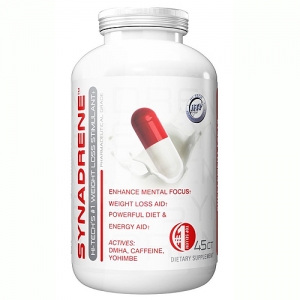 Synadrene Hi-Tech Pharmaceuticals is one of the most effective appetite suppressants with a strong thermogenic effect. The burner perfectly increases the energy level for the whole day. High doses of active ingredients ensure significant weight loss, increase focus on the gym and improve well-being. Ingredients with an antioxidant effect eliminate free radicals, protecting cells from oxidative stress. Synadrene with the addition of DMHA and yohimbine allows you to lose fat from the abdomen, thighs, buttocks and lower back. This is one of the strongest fat burners with an energizing effect. The addition of B vitamins and Sulbutamine allows the proper functioning of the nervous and circulatory systems.

Vitamin B12 - belongs to the group of vitamins that are soluble in water. It is known by other names: cobalamin or cyanocobalamin. It is not a single substance but a chemical compound containing, among others, cobalt. Deficiencies of vitamin B12 are particularly dangerous and concern mainly the psychological sphere, the nervous system and the hematopoietic system. Vitamin B12 acts as a non-protein component of the enzyme necessary for its activity in the production of monoamine neurotransmitters important for the brain: dopamine, serotonin and norepinephrine. Cobalamin deficiency results in disturbances in the synthesis of these important neurotransmitters, which may result in restrictions on the ability of cells to communicate in the central nervous system. This manifests itself in a worse mood, reduced energy and sleep problems. In addition, dopamine deficiency is the cause of Parkinson's disease. The right level of vitamin B12 is therefore extremely important for the proper functioning of the brain.

Vitamin B3 - is necessary, among others, for the proper functioning of the brain and peripheral nervous system. In addition, nicotinic acid is involved in the synthesis of sex hormones, cortisol, thyroxine and insulin. Scientists confirm the information about the equally surprising properties of vitamin B3. According to them, it improves the ability of immune cells to destroy Staphylococcus aureus (Staphylococcus aureus). Under the influence of this vitamin increases the number of white blood cells that can neutralize and absorb harmful bacteria

Chromium - affects the regulation of carbohydrate metabolism in the body, increases the effect of insulin and accelerates metabolism. In addition, it stimulates the synthesis of fatty acids and is involved in the transport of amino acids into the cells. Chromium prevents atherosclerosis by regulating the balance between good cholesterol (HDL) and bad (LDL).

Vitamin B6 - has a beneficial effect on the overall mood, is responsible for restful sleep, reduces the feeling of pain and prevents the occurrence of various types of chronic diseases. Its level is lowered, among others, by stress. It is a multidirectional vitamin. It is involved in many enzymatic reactions, and its correct level is crucial in maintaining and promoting health.

Caffeine Anhydrous - is an anhydrous form of caffeine from the group of organic compounds. It blocks adenosine receptors in the brain, which results in the reduction of tiredness during training. Due to its thermogenic effect, it effectively burns fat and improves metabolism.

Green Tea Extract - catechins contained in green tea inhibit an enzyme called catechol O-methyltransferase or COMT, which actually breaks down the main fat burning hormone, norepinephrine. Because green tea is rich in catechins, it helps raise norepinephrine levels, keep it elevated, and prolong thermogenesis. It has also been shown that there is a synergistic interaction between caffeine in green tea and catechins (in particular EGCG) in green tea, which increases the body's use of calories as energy. In addition, it was found that the combination of caffeine and EGCG in green tea significantly increases resting metabolic rate.

2-Aminoisoheptane - a strong stimulant similar to DMAA. It affects the central nervous system by increasing the level of dopamine and noradrenaline. Intensive workouts combined with the use of DMHA give phenomenal results in the form of appetite suppression, reduction of body fat, increase of memory and creativity as well as reduction of anxiety and anti-fatigue. The preparation is an interesting alternative for people who rave about the effects of DMAA, but show poor tolerance to this stimulant. The chemical structure of DMHA and DMAA shows close similarity, therefore their action is similar.

Walnut Extract - black walnut extract helps with indigestion, flatulence, has a beneficial effect on the functioning of the digestive tract. Has strong deworming effect, stimulates digestion. Walnut shell is used to regulate blood sugar levels and to remove residual toxins and fat. Its manganese is very important for the proper functioning of the nervous system, especially the brain.

Sulbutiamine - a derivative of the commonly known vitamin B1 (thiamine). It is an organic chemical compound that penetrates from the blood into the nervous system in an amazingly effective way. It is of great importance for the normalization of processes occurring in the nervous system - it tolerates anxiety attacks, improves the quality of contact with the environment, reduces such feelings as shame, shyness, lack of self-esteem or fear of other people. As a medicine, it is widely used to treat asthenia or sexual disorders that have a source in the psyche. Thanks to its nootropic properties, it greatly affects the use of memory and concentration, improves the performance and endurance of the whole body for both physical and mental effort.

Yohimbe Extract - works by blocking fat-burning α2 receptors that can significantly reduce weight loss and help sculpt resistant parts of the body. It is worth remembering that the effect of yohimbine effectively eliminates insulin, so taking this compound around meals containing carbohydrates is pointless. Yohimbine can be particularly effective when used on an empty stomach, before exercise.

ALA - a natural organic compound from the group of carboxylic acids, which plays an important role in removing free radicals, also has the ability to chelate metal ions, which improves the process of removing heavy metals from the body. Alpha-lipoic acid actively supports weight loss, which promotes the loss of excessive kilograms, further reducing excessive appetite and uncontrolled hunger attacks.

Poly-Thyronine - a thyroid hormone metabolite, also known as T2 or 3,3'-T2. The level of this hormone decreases with age and during a restrictive diet. 3,5-T2 affects fat loss even despite an increase in appetite or a higher calorie supply.