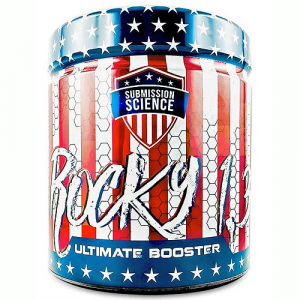 Submission Science Rocky 1.3 is a comprehensive pre-workout supplement. The bold formulation of the product has been composed using only the most effective substances, taking into account their required doses. Rocky 1,3 allows you to achieve powerful arousal, concentration and motivation to work with the simultaneous induction of a gigantic muscle pump. In Submission Science, scientists believe in the production of absolutely the best products - supported by science, driven by research and sustained by results.

Citrulline Malate 2: 1 - Participates in the synthesis of nitric oxide (NO) and phosphocreatine and aerobic glucose metabolism, thereby increasing the uptake of oxygen, glucose, amino acids and creatine and energy production through muscle cells. Reduces the concentration of lactic acid and ammonia in the muscles, allowing the body to recover energy faster by increasing the level of creatine phosphate and resynthesis ATP. Citrulline malate is a much more effective form than high doses of arginine, as it is its precursor. At the same dose as arginine is more effective in increasing its amount in the body than arginine alone.

AGmass ™ (Agmatine Sulfate) - AGmass ™ from Compound Solutions Inc. in Usa. is a highly pure and natural source of agmatine produced by modern fermentation methods. Agmatine effectively increases the secretion of nitric oxide in the human body, which translates into a strong muscle pump feeling during training. Enlargement of blood vessels supports the supply of blood and nutrients to working muscles, which greatly speeds up the process of regeneration and construction of new muscle fibers. In studies using agmatine, it has been shown that its action may support protein synthesis even twice, which in addition to the action of agmatine itself, is also associated with the action increasing the supply of nutrients to muscle tissues.

Creatine Nitrate - A modern and extremely durable form of creatine, which easily penetrates into the bloodstream. It affects the growth of muscle cell volume, giving the effect of "inflating muscles". It regulates the transport and formation of ATP, prevents catabolic processes and accelerates the rate of regeneration.

N-Acetyl Tyrosine - Acetylated derivative of the amino acid L-tyrosine. Ordinary L-tyrosine is less stable and also less soluble in water, which can lead to reduced bioavailability. N-acetyl-L-tyrosine supports brain function by supporting the synthesis of catecholamine norepinephrine and dopamine (neurotransmitters). N-Acetyl Tyrosine helps in the proper functioning of the nervous system, helps maintain normal psychological functions and contributes to the reduction of tiredness and fatigue.

Caffeine Citrate - Caffeine citrate has recently gained popularity in the fitness environment, because it raises the level of caffeine in the blood faster than other sources of caffeine.

1-3 Dimethylamine (Geranium) - A very strong stimulant. It stimulates the process of reducing body fat, as well as helping to increase the intensity of training.

Schisandra Chinensis - Citricium stimulates the central nervous system, contributing to the improvement of physical and mental fitness, stimulates the digestive system and regulates the level of sugar in the blood. The unique feature of Chinese lemons is also that it is a great way to detoxify our liver, and it also has the ability to purify the blood of toxic waste.