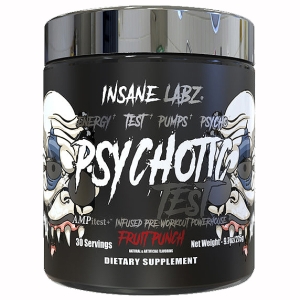 Psychotic Test is a new formula with synergistic ingredients. Provides a durable and substantial muscle pump and energy. It accelerates the building of muscle mass and is a testosterone modulator in the body. This is one of the stronger pre-training sessions from the USA with high stimulation. Rich in the patented AMPitest formula increasing testosterone levels. The supplement improves concentration during training and increases training endurance.

The revolutionary patented formula of AMPiberry perfectly reduces oxidative stress, reduces inflammation and reduces muscle soreness. The Psychotic Test is ideal for athletes who need a high dose of energy during intense workouts. The stimulating formula enriched with ingredients that increase testosterone levels will delight all athletes looking for a pre-workout that strengthens their masculinity.

Get to know the ingredients of the Psychotic Test pre-workout booster:

Rauwolfia Vomitoria Extract - has antioxidant, anti-inflammatory, analgesic properties, supports the carbohydrate and insulin metabolism, prevents cancer and improves mental condition. High standardization of the rauwolscine extract, also known as alpha yohimbine or isoohimbine, focuses the product's action on the nervous system and the loss of unnecessary body weight. By interfering with the work of the cholinergic system, it increases the concentration of adrenaline, stimulating the system to function and intensifying the lipolysis process. By intensifying the oxidation of fatty acids in the mitochondria. It promotes the burning of previously accumulated fat in the areas of the body rich in α2-adrenergic receptors, mainly in the lower abdomen and on the hips.

Beta Alanine - belongs to organic chemical compounds from the group of amino acids, the structural isomer of alpha-alanine, i.e. the basic protein amino acid. It belongs to the so-called β-amino acids in which the amino group is on the β-carbon with respect to the carboxyl group. β-alanine is a component of the carnosine dipeptide (β-alanyl-L histidine), the biosynthesis of which depends on the availability of β-alanine as a substrate. Carnosine buffers the drop in pH associated, among others, with with the formation of lactic acid in the muscles during exercise. Therefore, taking β-alanine reduces physical decline.

Glycerol Monostearate - glycerol hydrates muscle cells, which is of great importance not only for their size but also for muscle fiber contractions. Glycerol monostearate also increases blood volume and improves the blood supply to working muscles. The most important benefit of this substance for bodybuilders is the ability to bind and retain water. When glycerin reaches the muscles, it binds fluids, which makes the muscle more swollen and increases its efficiency. The mechanism of action of glycerol is similar to that of creatine binding water. Along with the water, many anabolic substances and blood borne hormones reach the muscles. Through an exceptionally high dose of glycerol, glycerol allows you to quickly obtain a muscle pump.

Creatine HCL - pure creatine hydrochloride without any unnecessary flavors, dyes or preservatives. It is a highly efficient form of creatine that contributes to increasing physical efficiency, strength and muscle mass. Recommended for athletes and active people looking for an effective creatine supplement in the period of building their peak condition, which can be used even immediately before the competition because it does not cause subcutaneous water retention.

OxyGold - the registered name of fulvic acid, showing the ability to increase energy levels. It promotes the efficiency of cell functioning. It also protects against them, showing antioxidant activity. Fulvic acid is also used as an agent to reduce pain and promote cognitive abilities.

D-Aspartic Acid - a naturally occurring substance in the human body, belonging to the group of endogenous amino acids. DAA increases testosterone production. In addition, the use of DAA improves memory and cognitive function. The compound increases the secretion of dopamine, which is an important neurotransmitter responsible for high levels of energy and motivation to act.

AMPitest - a patented formula that increases testosterone levels in the body. Contains D-aspartic acid, chlorophytum extract. It affects the accelerated building of muscle mass after the end of training.

Caffeine Anhydrous - has a thermogenic effect and suppresses appetite due to the increase in the production of adrenaline and norepinephrine. It has been proven that it causes an increase in the formation of such neurotransmitters in the central nervous system as dopamine, acetylcholine or even serotonin, which exerts a stimulating effect and increases cognitive functions. The overall effect of caffeine on the body allows you to maintain the effectiveness of training and maintain a positive mood, despite the caloric deficit.

Choline Biartrate - is a substance necessary for the proper functioning and structure of every cell in our body. It occurs in the body in compounds called phospholipids, the best known and most abundant of them is lecithin. Phospholipids have many functions in our body, they build cell membranes and act as transmitters in the nervous system (most likely they are involved in "creating" memory). An important function of choline is its participation in the transport and metabolism of cholesterol and other fats - it reduces their deposition in the vascular wall and gall bladder, and also affects the work of the liver (also reducing fat deposition) and kidneys (regulates the amount of urine excreted).

AMPiberry - the proprietary name of the product present in the Black Psychotic supplement, developed on the basis of the fruit extract of the common juniper (Juniperus communis L.), an evergreen tree from the Cupressaceae family that grows abundantly in areas of the globe with a cooler climate, especially in the mountainous area of ​​Himachal Pradesh located in India. Due to the direct antioxidant properties and indirect ones caused by the increase in the concentration of superoxide dismutase, catalase and glutathione peroxidase, it has an anti-apoptotic effect in the nervous system. It reduces inflammation and reduces the feeling of pain, including headache. By interfering with the neuronal excitability, it reduces the feeling of fatigue and discouragement, motivating the body to continue working. Demonstrates synergy of action with caffeine.

DMAE - an intermediate in endogenous choline synthesis structurally similar to it. It is found in small amounts in the brain. It is a more effective precursor of acetylcholine than choline itself, because when delivered from outside, it more efficiently crosses the blood-brain barrier. Belongs to nootropic substances and drugs that stimulate the central nervous system (CNS), but its stimulating properties are quite mild. It increases the synthesis of acetylcholine, improving neuronal transmission in the cholinergic system.