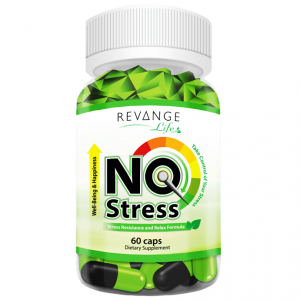 Revange No Stress is a new supplement with a relaxing effect, rich in the most effective ingredients that lower cortisol levels and improve well-being. The stress-fighting mind booster contains strong ingredients, including Phenibut, which ensures a state of deep relaxation or 5 HTP, which naturally increases the level of serotonin in the brain, which is responsible for well-being and reduces depression.

No Stress supplementation allows you to naturally reduce anxiety and inhibits the growth of corticosterone (a stress hormone). The preparation with a strong regenerative effect is recommended for people struggling with high levels of stress during the day, depressive disorders, depressed mood, anxiety or nervous insomnia.

Phenibut - increases the regeneration of the body and leads to an increase in endurance and physical condition. It is also a great preparation that improves the quality of sleep, as it puts the body into a state of deep relaxation and stress relief. It significantly improves the functioning of the brain, leading to the normalization of the metabolism of the brain tissue, as well as modulating the blood flow in the central nervous system. Phenibut thus increases the efficiency of the human mind, having an impact on improving cognitive functions. It is a measure very often used by athletes, because it increases the secretion of certain isoforms of growth hormone, thus influencing the rapid growth of muscle mass.

Rhodiola Rosea - a plant belonging to the group of adaptogens, plants that help the body adapt to high mental and physical stress. It is also known as arctic root or golden root. It contains over 140 active ingredients, the two most important of which are rosavin and salidroside. Rosavins and salidroside increase the level of serotonin and dopamine in the brain. Additionally, they lower the level of adrenal hormones, such as glucocorticosteroids and cortisol. These hormones are produced by the glands under stress. Both ingredients stimulate the synthesis of endorphins called the happiness hormone. Rosavins perfectly improve mood, increase concentration, improve memory and promote cognitive functions. The main action of Rhodiola is to relieve fatigue, improve concentration and improve mood. All this translates into better results both at the gym, as well as at work or school.

5 Htp - a compound that is a direct precursor to Serotonin, a hormone that plays a very important role in the processes of appetite regulation, mood improvement and optimization of the secretion of other hormones. Since Serotonin itself does not have the ability to cross the blood-brain barrier, an effective way to increase its level is supplementation with its precursors, among which the most effective is 5-hydroxytryptophan. Numerous studies show a direct relationship between the administration of 5-HTP and the improvement of sleep, suppressing hunger pangs, normalizing the level of insulin, cortisol and prolactin, or relieving anxiety states.

L-Theanine - is a non-protein amino acid found naturally in green tea leaves - camellia. It has psychoactive properties because it easily crosses the blood-brain barrier. It stabilizes the mood, calms down, relieves symptoms of stress and anxiety. Also used as a nootropic agent - improving cognitive functions, work efficiency and learning efficiency. Researchers have proven the effectiveness of Theanine in increasing concentration, alertness and productivity, and the effects are already visible within the first hour after administration. Scientists believe that the theanine is responsible for the relaxing effect of green tea, which affects the intensity of alpha waves in the brain, probably by affecting the activity of certain neurotransmitters, including dopamine and serotonin. It is remarkable that this amino acid can increase alertness and clarity of mind, while at the same time introducing you to a state of relaxation and deep relaxation so strongly that it can withstand the stimulating effects of caffeine. Thanks to this, it is suitable for people who react poorly to stimulants or who suffer from neurotic-anxiety disorders, and at the same time need to maintain high productivity and alertness of the mind.

Mucuna Pruriens Extract - highly bioavailable for the brain, which easily and effectively increases the possibilities of dopamine synthesis. This amazing neurotransmitter is an extremely important element for the proper functioning of the nervous system and the flow of nerve signals. Dopamine deficiency has been demonstrated in people diagnosed with Parkinson's disease, especially in the regions of the brain responsible for its motor level. Low levels of this neurotransmitter may be manifested by the onset of memory loss, problems with achieving full focus and concentration, and it often affects the elderly.

Naringin - a flavonoid found in a grapefruit. It increases the metabolic rate, increases lipolysis, strengthens blood vessels, has anti-inflammatory properties and lowers cholesterol.

Grape Seed Extract - The resveratrol contained in grapes acts as an antioxidant, scavenging free radicals that damage the body's healthy cells. It is a substance that reduces the absorption of LDL cholesterol in the walls of blood vessels, reducing the risk of heart disease and atherosclerosis. It inhibits the aggregation of platelets and prevents the formation of dangerous blood clots. It is perceived as a substance that has anti-obesity properties and may also have a beneficial effect in preventing diabetes. In addition, it has the ability to lower blood pressure levels, which is an important factor in preventing civilization diseases.

Piperine 95% - the active ingredient of black pepper, has a thermogenic effect. It can increase the blood supply to the digestive tissues, resulting in better digestibility of food ingredients. It significantly improves the bioavailability of many active ingredients of supplements.

Dosage of No Stress: