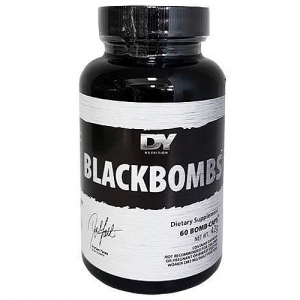 BlackBombs Dorian Yates is an exceptionally powerful fat burner, designed for experienced athletes. The intense formula rich in proven ingredients with a stimulating effect allows you to lose body fat and increase thermogenesis. The combination of ingredients such as yohimbine, dmaa, synephrine, caffeine, and theacrine affects the rapid loss of fat.

Caffeine - the active ingredient stimulates mental and physical activity, increases energy and concentration, and helps reduce unnecessary body fat. The benefits of using the preparation include: increasing energy, accelerating metabolism and thermogenesis. In addition, it effectively prevents fatigue and allows you to perform longer workouts. Caffeine is well known for its ability to stimulate the central nervous system and mental activity. Effectively increase endurance and concentration, increase blood pressure and have a pronounced diuretic effect. Caffeine minimizes fatigue and increases physical endurance, which makes it a suitable product for athletes and people exposed to physical and mental effort.

1,3 DMAA - works great both as a stimulant and as a fat burner, especially in combination with caffeine and other substances that stimulate the nervous system and intensify the phenomenon of thermogenesis. This powerful active ingredient is effective in providing strong stimulation. It indirectly stimulates the increase of adrenaline in the body and directly activates adrenergic receptors. Provides a strong increase in energy, stimulation and concentration. When combined with caffeine, its effectiveness increases. After penetrating the nervous system, Geranium stimulates the release of dopamine, thanks to which it ensures concentration and a good mood, which is key during training.

Sausage Tree Extract - African extract with a stimulating effect. It stimulates the central nervous system, increasing energy, and increases the activity of neurotransmitters. It also has a mild analgesic effect, increasing the pain threshold and extending training sessions.

Guarana - has a stimulating effect, eliminates physical and mental fatigue, increases the ability to concentrate and remember. The effect of guarana can, in a simplified manner, be compared to that of coffee. However, because guarana caffeine is absorbed from the gastrointestinal tract a little slower, its effect lasts up to 6 hours, i.e. about 2 hours longer than coffee - but at the same time it is milder, less intense.

Bitter Orange Extract - bitter orange is not an edible fruit, but it is an excellent source of vitamin C, the amount of which in the extract can reach even 42%. Compared to regular oranges, bitter oranges are much richer not only in vitamin C, but also in antioxidants, e.g. bioflavonoids such as hesperidin. In addition to the high content of perfectly digestible vitamin C, the bitter orange is famous primarily for its compactness in the synephrine plant, which is a natural substitute for ephedrine. This compound increases the metabolism, reduces appetite and at the same time increases mental and physical activity. Synephrine increases blood pressure and affects the cardiac output. It widens the bronchi, making it easier to breathe, effectively clears the sinuses and improves well-being.

Taurine - this amino acid increases the endurance of the body and prevents the symptoms of fatigue, and also improves our concentration. Taurine enables faster and more effective post-workout regeneration. Another important feature of this amino acid is that it reduces the negative effects of stress while we are on reduction and following a low-carbohydrate diet. Taurine is also anti-catabolic and supports the transport of creatine.

Theacrine - Theacrine is an alkaloid that is structurally related to caffeine and also activates similar signaling pathways. Under natural conditions, theacrine is most likely synthesized from caffeine and then stored. It is believed to be the most concentrated in Chinese tea, Camallia sinensis, where it occurs alongside caffeine and theobromine. This substance effectively increases the level of energy in the body, and its action is very similar to caffeine, with the difference that it works much longer, shows a slower increase in tolerance and does not cause unpleasant effects. In addition, the substance does not increase blood pressure.

Niacin - is extremely important for the functioning of the peripheral nervous system. Niacin increases the activity of mitochondria. In addition, it contributes to the proper maintenance of cholesterol in the blood, and also participates in the synthesis of sex hormones: insulin, cortisol and thyroxine.

Vitamin B6 - is a coenzyme of many enzymatic changes in the body, including transamination and decarboxylation of amino acids. It is particularly important in the transformation of tryptophan, which produces serotonin and nicotinic acid. It is essential in the process of phosphorylation, influences glycogenesis and glycogenolysis in muscles, and plays an important role in immune and hematopoietic processes. It reduces the secretion of prolactin, which has a negative effect on male libido.

1 capsule daily in the morning with a meal.