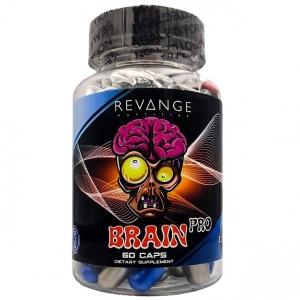 Revange Brain Pro is a new booster with nootropic action, designed for people who need to increase memory, increase well-being and sharpen focus for a long time. The unique formula from the smart drug category is a strong booster that increases cognitive functions, reduces stress, and has an energizing effect needed for increased mental effort.

Brain Pro mind booster is a mixture of stimulants, adaptogens and nootropics allowing you to cope with the most difficult mental tasks while maintaining high concentration, clarity of mind and increased motivation. Brain Pro regulates the acetylcholine balance, increases memory and has a neuroprotective effect.

The supplement is recommended for people who work intensively mentally, students and anyone who needs exceptional concentration and increasing mental performance. It is one of the most effective mental boosters with a content of stimulating and non-stimulating ingredients that increase mental activity, regulate the activity of neurotransmitters, promote an increase in serotonin levels, and increase overall mood. Brain Pro promotes the growth of creativity, mood, attention, motivation and alertness, providing the best mental support.

Bacopa Monnieri Extract - a well-known and highly valued herb of Ayurvedic medicine. Recommended in states of increased cognitive effort, to improve memory and concentration, in states of depression, low libido and for the elderly showing symptoms of dementia and confusion. Due to its adaptogenic properties, stimulating the formation of new proteins and anti-inflammatory, it works great after strokes and brain injuries. It has strong antioxidant properties, effectively removes free radicals, thus inhibits neoplastic processes and supports the regeneration and renewal of tissues.

Rhodiola Rosea Extract - a plant that belongs to the group of adaptogens, plants that help the body adapt to high mental and physical stress. It is also known as arctic root or golden root. It contains over 140 active ingredients, the two most important of which are rosavin and salidroside. Rosavins and salidroside increase the level of serotonin and dopamine in the brain. Additionally, they lower the level of adrenal hormones, such as glucocorticosteroids and cortisol. These hormones are produced by the glands under stress. Both ingredients stimulate the synthesis of endorphins called the happiness hormone. Rosavins perfectly improve mood, increase concentration, improve memory and promote cognitive functions. The main action of Rhodiola is to relieve fatigue, improve concentration and improve mood. All this translates into better results both at the gym, as well as at work or school.

Ashwagandha Extract - high-quality Ashwagandha root extract, adaptogen contained in Pure Stress Relief has a positive effect on the body's energy management. It contributes to the protection of tissues against damage - acts as an antioxidant and supports the building of muscle tissue. It helps in maintaining vitality, well-being and emotional balance as well as in states of reduced concentration, exhaustion, fatigue and nervous tension. In addition, it supports the processes of learning, remembering and maintaining mental fitness in good condition.

Ginkgo Biloba Extract - effectively improves memory disorders and problems with concentration. It has a positive effect on the circulatory system, improving blood flow in the vessels. What's coolest, it delays the aging process. It inhibits or eliminates unpleasant tinnitus and dizziness. It has a slightly diuretic and cleansing effect. It inhibits the activity of free radicals (antioxidant effect), which helps to keep the skin youthful.

Alpha GPC - choline alfoscerate is a natural precursor of acetylcholine, which is a neurotransmitter that supports the development of cognitive functions, as well as favorably improving memory. Alpha GPC is a highly bioavailable form of choline that is part of cell membranes in the brain and other nervous tissues. Alpha-GPC activates the parasympathetic (relaxing, sedative) system, increases the level of GABA (inhibitory neurotransmitter) and growth hormone (GH, regenerating hormone), reduces adrenergic (sympathetic) activity, thus reducing the effects of stress and irritation. It has a calming, anti-stress and relaxing effect. Supports the regeneration of the nervous system.

Alpha GPC - choline alfoscerate is a natural precursor of acetylcholine, which is a neurotransmitter that supports the development of cognitive functions, as well as favorably improving memory. Alpha GPC is a highly bioavailable form of choline that is part of cell membranes in the brain and other nervous tissues. Alpha-GPC activates the parasympathetic (relaxing, sedative) system, increases the level of GABA (inhibitory neurotransmitter) and growth hormone (GH, regenerating hormone), reduces adrenergic (sympathetic) activity, thus reducing the effects of stress and irritation. It has a calming, anti-stress and relaxing effect. Supports the regeneration of the nervous system.

L-Theanine - is a non-protein amino acid found naturally in green tea leaves - camellia. It has psychoactive properties because it easily crosses the blood-brain barrier. It stabilizes the mood, calms down, relieves symptoms of stress and anxiety. Also used as a nootropic agent - improving cognitive functions, work efficiency and learning efficiency. Researchers have proven the effectiveness of Theanine in increasing concentration, alertness and productivity, and the effects are already visible within the first hour after administration.

5-htp - a naturally occurring substance that is obtained from the seeds of the West African plant Griffonia simplicifolia. Man has the ability to self-produce it from L-tryptophan - an amino acid found in protein-containing products, although the consumption of this amino acid does not ensure a constant increase in 5-HTP in the body. In practice, 5-hydroxytryptophan acts as a precursor to serotonin (5 HT), which by converting - ensures an increase in the level of this very important hormone - a neurotransmitter, which plays a huge role in many human life functions. When taken orally, 5-HTP enters the bloodstream quickly, and its absorption is over 70%. 5-HTP improves mood and increases energy levels, by using a 5-HTP supplement it is much easier to persevere in the ongoing slimming treatment.

Mucuna Pruriens - highly bioavailable for the brain, which easily and effectively increases the possibilities of dopamine synthesis. This amazing neurotransmitter is an extremely important element for the proper functioning of the nervous system and the flow of nerve signals. Dopamine deficiency has been shown in people diagnosed with Parkinson's disease, especially in the regions of the brain responsible for its motor level. Low levels of this neurotransmitter may be manifested by the onset of memory loss, problems with achieving full focus and concentration, and it often affects the elderly.

Phospatidylserine - is a derivative of the amino acid serine. It is part of the structures of the cell membrane, regenerates brain cells, and improves mental performance. It acts as a natural nootropic, increasing memory, reducing stress and having a positive effect on well-being.

Phenylpiracetam - facilitates the synthesis of high-energy compounds in nervous tissue and increases energy reserves by improving the use of glucose and oxygen in neurons of the central nervous system, as well as by increasing the tolerance of nerve cells to the reduced amount of oxygen. Moreover, by preventing the aggregation (sticking) of morphotic elements, it reduces blood viscosity and improves microcirculation in cerebral vessels. The action of piracetam results in the improvement of psychophysical fitness, concentration of attention, the ability to remember and restore information stored in long-term memory. In addition, it is used in patients with sickle cell anemia, because it prevents red blood cells from sticking together and has a positive effect on the flexibility of their cell membranes.

Noopept - a popular agent that improves the functioning of the central nervous system. Its action is based on the stimulation of receptors responsible for the release of neurotransmitters. Clearly improves memory, learning ability, logical reasoning. It makes the brain better oxygenated and supplied with blood, thanks to which all information processing processes run faster and more efficiently.

Pterostilbene - an organic chemical compound, a derivative of resveratol. It is a methylated stilbene molecule with a structural similarity to resveratrol, the only difference being the two methoxy groups on the pterostilbene molecule which replace the hydroxyl groups in the resveratrol molecule. While most of these effects are comparable, pterostilbene appears to be much better absorbed orally and may be a more potent antioxidant and anti-cancer molecule. The compound protects against oxidative stress, has a neuro- and cardio-protective effect, has a positive effect on memory and concentration, and also has anti-cancer properties. Pterostilbene has many valuable properties and it is probably one of the most underrated compounds in medicine.

Vinpocetine - increases blood flow in blood vessels, improves the use of glucose and oxygen by the brain tissue and contributes to increasing the tolerance of cells to hypoxia. Thanks to this, it perfectly improves memory, facilitates concentration and increases mental efficiency.

Huperzine A - an alkaloid capable of penetrating the blood-brain barrier, which is a negative catalyst for the decomposition of acetylcholine, improves nerve conduction and has a significant impact on concentration, association and memory. It helps to alleviate the effects of oxygen stress, prevents depression and has neuroprotective properties that improve well-being. In sports supplementation, it is recommended in the pre-training and pre-exercise periods and during exercise in order to improve concentration.

Theacrine - is an alkaloid that is structurally related to caffeine and also activates similar signaling pathways. Under natural conditions, theacrine is most likely synthesized from caffeine and then stored. It is believed to be the most concentrated in Chinese tea, Camallia sinensis, where it occurs alongside caffeine and theobromine. This substance effectively increases the level of energy in the body, and its action is very similar to caffeine, with the difference that it works much longer, shows a slower increase in tolerance and does not cause unpleasant effects. In addition, the substance does not increase blood pressure.

DMHA - the short name of 2-aminoisoheptane, a compound with significant stimulating properties. It increases the concentration of active norepinephrine and dopamine, demonstrating a broad-spectrum stimulating effect. Thanks to this, it sharpens the senses, reduces the feeling of fatigue, facilitates concentration and associating facts and promotes remembering. It also increases physical abilities and lowers the pain threshold.

N-Acetyl L-Tyrosine - acetylated derivative of the L-tyrosine amino acid. Ordinary L-tyrosine is less stable and also less soluble in water, which can lead to reduced bioavailability. Acetylation increases the solubility and stability of some amino acids. N-acetyl-L-tyrosine supports the functioning of the brain by supporting the synthesis of norepinephrine catecholamines and dopamine (neurotransmitters).

Green Tea Extract - The catechins in green tea inhibit an enzyme called catechol O-methyl transferase or COMT, which actually breaks down the fat burning hormone norepinephrine. Since green tea is rich in catechins, it helps to raise norepinephrine levels, keep it elevated and prolong thermogenesis. It has also been shown that there is a synergistic interaction between caffeine in green tea and catechins (particularly EGCG) in green tea, which increases the body's use of calories as energy. Moreover, the combination of caffeine and EGCG in green tea was found to significantly increase the resting metabolic rate.

Hordenine HCL - is a natural phenylethylamine compound that is present in small amounts in various plants. This supplement works primarily by releasing and protecting norepinephrine, which translates into an increase in metabolism, energy supply and a decrease in appetite. Users use Hordenine for three main effects: fat loss, appetite control, and energy boost

Naringin - is an organic chemical compound found in some fruits (e.g. in grapefruit, oranges) and in vegetables (e.g. in tomatoes). It has anti-inflammatory properties and helps lower cholesterol.

Bioperine - the active ingredient of black pepper, has a thermogenic effect. It can increase the blood supply to the digestive tissues, resulting in a better digestibility of food ingredients. It significantly improves the bioavailability of many active ingredients of supplements.

1-2 capsules a day before mental effort.